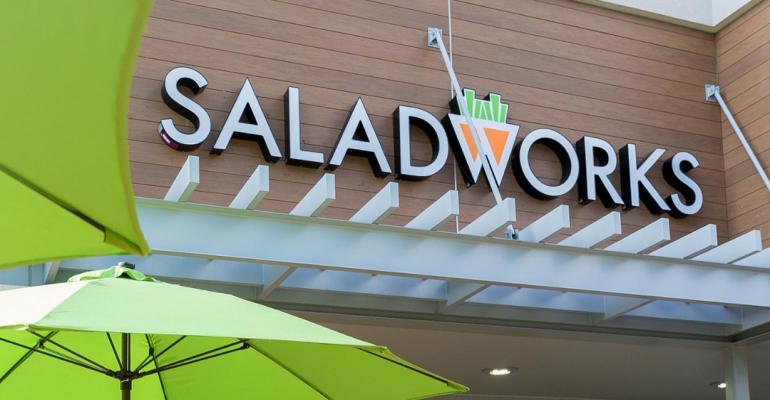 A franchising industry veteran is expanding a concept that offers restaurant brands as takeout/delivery franchises to entrepreneurs and established restaurant operators.

Combo Kitchen currently has 35 franchisees “and is expanding rapidly,” she said.

Its website lists locations in several states the Southeast, Northeast and Midwest, and in California.

Combo Kitchen recently added the Saladworks and Frutta Bowl concepts, both owned by Woworks, to the portfolio of brands that it offers. Other Combo Kitchen brands include Dickey’s Barbecue Pit, Wing Boss, Big Deal Burger and several regional brands in markets where it is offering its franchises.

The first Combo Kitchen incorporating a Saladworks opened in Miami on April 10, followed by additional locations in New York City and Jersey City, N.J. Woworks said it anticipates adding between five and seven locations per month for the remainder of the year.

Combo Kitchen collects a royalty fee from the sales generated by each Combo Kitchen partner restaurant brand operated in each location, Kasmai explained. A portion of the royalty is then paid to the licensed brands.

For the brands, the partnership with Combo Kitchen helps them expand into new locations, while the Combo Kitchen franchisees gain access to the company’s roster of established concepts.

Depending on whether the franchisee has an existing restaurant, the number of brands they choose to offer through Combo Kitchen can vary, Kasmai said.

“If a restaurant owner is adding brands to their existing restaurant, they typically only have space for one or two,” Kasmai said. “When a franchisee does not operate an existing restaurant and is opening a ghost kitchen from scratch with Combo Kitchen’s brands, they usually pick five or more.”

Combo Kitchen also offers a multi-page presence on each third-party delivery platform that it works with, which allows items from multiple concepts at a single location to be combined on one order with a single delivery fee, she said. Each brand has its own individual page, as well as an additional page per location called “Combo Kitchen,” which lists the menus for all brands at that location, Kasmai explained.

She said Combo Kitchen provides operational training to its franchisees, as well as ongoing support, for each of the restaurant brands it offers.

He declined to disclose the financial details of the partnership.

Woworks trained the Combo Kitchen team, Lavinder said, so that Combo Kitchen can provide operational support to its franchisees, and Woworks provides updated training materials as needed, and assists with supply chain issues when necessary. Woworks and Combo Kitchen also have a weekly call to ensure they remain aligned, Lavinder said.

Woworks has a set menu that it prefers to adhere to, he said, but has been flexible with franchisees based on the location and space available in each kitchen, he said.

He said the company is primarily focused on finding the right operators for the Combo Kitchen partnership, rather than focusing on specific markets.

“Obviously, market planning is important for supply chain and market awareness, but since this is not a guest-facing traditional store, we have much more flexibility on geographic opportunity and can focus on markets we feel are best suited to compliment the other brands already open, locations that have space, and have great operations,” Lavinder said.

In the past year, Saladworks has added more than 40 locations, including in new markets that include Canada, California, Tennessee, Rhode Island, Ohio, Florida and Indiana. About 80% of these new locations are non-traditional operations, such as ghost kitchens, food trucks, grocery retail, hospitals and universities.